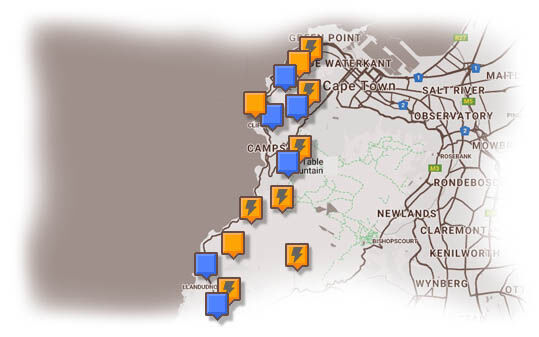 When you consider high-end residential property, with prices escalating into the millions, then Cape Town’s Atlantic Seaboard should come first to mind. Arguably one of the most exclusive places to live, the area, extending from Green Point to Hout Bay, offers so much to visitors as well. Some of the places to check out include Camps Bay, Clifton, Llandudno, Sea Point, and the Waterfront.

The area is characterised by glorious white sandy beaches, the azure Atlantic Ocean, expansive homes with unending views, as well as a fantastic variety of food and dining options… with a tinge of that European-style feel.

The affluent suburb of Clifton, whose exclusive residences lie nestled among the cliffs, is considered one of the top lifestyle destinations. In 1984, the seaside area of Clifton was declared a National Monument, which prevented unsightly apartment block developments spreading across the idyllic scenery. There are four stunning beaches to choose from in Clifton, aptly named 1st, 2nd, 3rd and 4th Beach, separated by dotted boulders. The Discovery Travel Channel rated Clifton as a Top 10 Beach in 2003 and 2004 worldwide.

For the locals and older folk, 1st Beach is the hangout, overlooked by high-end apartments, and is generally less populated than the other three. To catch a few rays, then 2nd Beach is the ultimate spot, while 3rd Beach is preferred by those who are seeking some privacy. If you’re looking for the trendy people, then the most well-known 4th Beach is for you. It has easy access from the parking area and is in close proximity to ablution facilities.

You will then find, located between the Lions Head, Table Mountain and Twelve Apostles mountain ranges, the glorious village of Camps Bay – internationally renowned for its fine white sandy beaches and wealth of wining and dining options. Because of its position, Camps Bay provides a protected bathing experience, with calm waters suited to swimming, and even a tidal pool at the southern end. The palmed-line beach is very enticing, but those waters are cold year-in and out!

After a very refreshing dip, why not try some of the Cape’s finest seafood at one of the many Camps Bay restaurants. The Blues Restaurant & Bar, established in 1987, is a Camps Bay institution, serving a delectable variety of West Coast oysters, mussels and crayfish. Another enticing option is The Roundhouse. Formerly the hunting lodge of Lord Charles Somerset, this European-inspired restaurant ensures the meals have a distinctive South African flavour.

Once satiated, take a stroll over to the Camps Bay African Craft Market, situated between mountains and sea. Enjoy the salty fresh air while you browse the quality, handcrafted curios, leather, beaded items and animal hides. And, if you’re feeling the need for a cultural boost, then catch a show at the Theatre on the Bay. This intimate 238-seater theatre puts on a range of top South African performances with drinks available at Dietrich’s Bar and food at the Act 1 Theatre Café.

Also forming part of the stunning Atlantic Seaboard is the scenic village of Llandudno, just 18 kilometres from Cape Town CBD and nestled in a secluded, peaceful cove. Here you will find one of the areas most picturesque beaches. Soft white sand stretches off into the distance, interrupted only by the untouched Cape fynbos. For those who prefer to throw some caution – and bathing suits – to the wind, then a 20-minute walk from Sunset on the Rocks will take you to the world-famous nudist beach, Sandy Bay.

A stroll around the upmarket Llandudno village is worth the time in itself. With the views of The Twelve Apostles on one end, mirrored by Little Lion’s Head and the Karbonkelberg Mountain the other side – and no commercial developments within the enclave – this is as photogenic a spot as you can find.
View Town List
Shows all the towns with accommodation
View $elect Stays List
Shows listings offering a 15% discount to members

© Warren Rohner (License)
White sand at Clifton beach. While it is an exclusive residential area and home to the most expensive real estate in South Africa, owning a yacht is totally optional... we're told

© Warren Rohner (License)
Looking towards the beach at Clifton

© jeanvdmeulen (License)
Hout Bay is the base port to rich marine life and offers some of the finest yellowfin tuna, longfin tuna, and yellowtail fishing in the world

© Miriam Miro (License)
Mouille Point, close to the Cape Town Stadium and the start of the Sea Point Promenade